The video and diagrams below should give you a good introduction to all the different parts of the Great Highland Bagpipe. 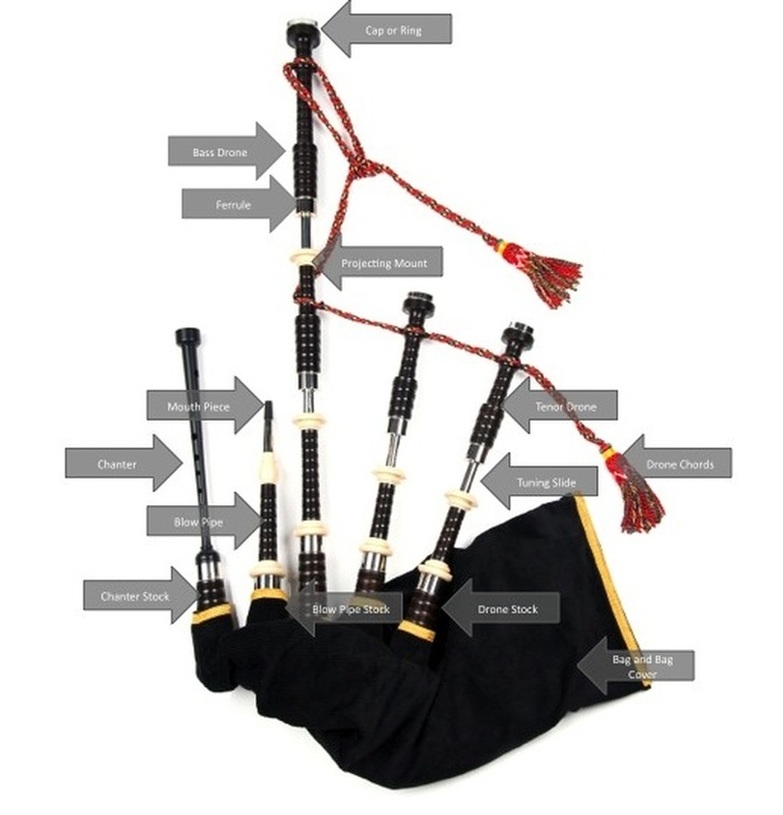 MOUTH PIECE
A tubular piece of wood or plastic that screws onto the threaded end of the blowpipe and fits into the piper's mouth.

CHANTER
The portion of the instrument that the piper produces the melody of a tune with. Sometimes called a "pipe chanter."

CHANTER STOCK
A collar (typically wood, but sometimes plastic) that is attached to ("tied into") the bag into which fits the chanter.

BLOW PIPE
Used to get air from the piper's mouth to the bag. One end of the blowpipe is fitted with a replaceable mouthpiece and the other is commonly fitted with a valve.

BLOW PIPE STOCK
A wood (or plastic) cylinder which is secured to the bag and into which is inserted the blowpipe.

BAG AND BAG COVER
An airtight sack of sorts to which the stocks are secured. Traditionally made of sheepskin or cowhide, now also made of Gortex and other synthetics or combination of a synthetic interior and a hide exterior. This bag is covered by a decorative fabric. The fabric is commonly velvet, corduroy, or a tartan, but others are also used. Fringe at each of the openings (chanter stock, drone stocks, blowpipe stock and rear) is common.

DRONE STOCK
A collar (typically wood, but sometimes plastic) that is attached to ("tied into") the bag into which the drones fit.

DRONE CHORDS
Rope-like material, with tassels on the two ends, used to secure drones into position.

TENOR DRONE
The two short drones on a set of bagpipes, when tuned sounds exactly one octave lower than Low-A of the chanter.

CAPE OR RING
A round piece of material (often plastic, metal, ivory, horn or decorative wood) which encircles the top of a drone.

PROJECTING MOUNTS
The items "mounted" to the wood on a set of pipes (often plastic, metal, ivory, horn or decorative wood).

FERRULE
Metal rings located at the end of a stock or drone cylinder to keep the wood from swelling and splitting; usually composed of nickel, silver, ivory or a synthetic ivory.

BASS DRONE
The longest drone on a set of bagpipes, when tuned sounds exactly two octaves lower than Low-A on the chanter. 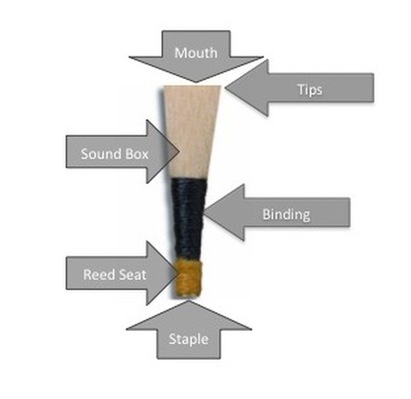 MOUTH
The opening located at the top of a chanter reed, formed by two opposing pieces of cane.

TIPS
A very delicate part of the reed where so mouth opens.

SOUND BOX
The space inside of a reed that is located between the top of the binding and the shoulder.

BINDING
The hemp used to wrap the two pieces of cane to the staple of chanter reed.


REED SEAT
The tapered hole located at the very top of the chanter or at the base of the drones into which fits a reed.

STAPLE
The cylindrical/conical piece of metal at the base of a chanter reed, typically copper or brass that provides a support for the blades. 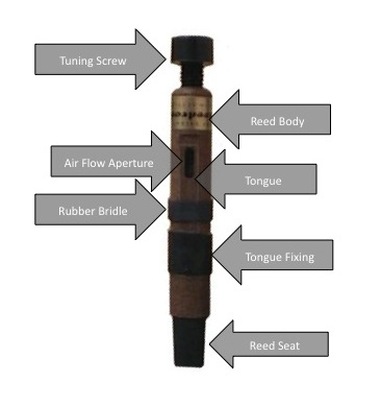 TUNING SCREW
A threaded insert at the unseated end of a synthetic drone reed that alters the pitch of the reed when screwed in or out. Invented by Mark Wygent as an alternative to the tuning/end plug.

REED BODY
The largest part of the reed that the air travels down.

AIR FLOW APERTURE
The hole in the reed where the air escapes and hits the tongue producing the sound.

TONGUE
The vibrating surface of the reed.

TONGUE FIXING
The rubber band that keeps the tongue in place.

REED SEAT
The section of the reed that fits into the drone seat.

COMBING
The parallel ornamental ring grooves carved into parts of a bagpipe for decoration.


BEADING
The wider areas between the combing on a drone for decoration. Both the combing and the beading is purely ornamental.