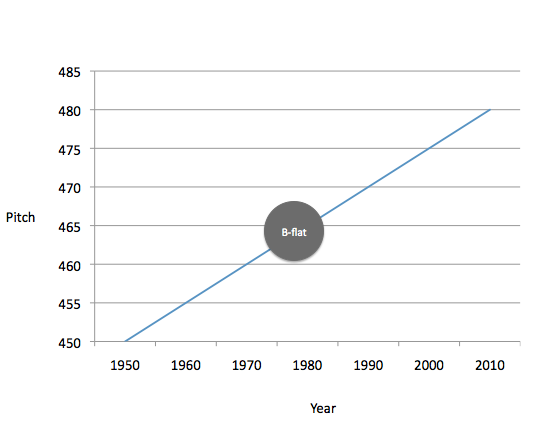 Over the years bagpipes pitch has risen steadily and it doesn't appear to be slowing down. Grade 1 pipe bands keep raising the pitch of their chanters to try and create  a more pleasing sound with the hope it will give them a competitive advantage over the other bands.

This puts bagpipe chanters in a weird spot because they are currently tuning between B-flat and B. In the 1950s pipe chanters were closer to A than b-flat and that why bagpipers refer to their B-flat as A.

If the highland bagpipes continue in this fashion they will eventually be in B (494Hz) and will be considered a B instrument instead of B-flat.


Temperament is the adjustment that is made to the tuning of an instrument to correct any inaccuracies that exist in a scale. Musicians have used many different temperaments over the last 300 years to create what they think is the perfect tuning. Since the 18th century most musicians have been using a method called equal temperament where the intervals between each note are equal. This was done so there would be some common and universal scale that all instruments could play and be in tune with each other.

Bagpipes do not use equal temperament tuning; bagpipers use Just-In temperament. The intervals rather than being equal are adjusted to produce the optimum consonance between every note. This system is not used by many instruments because it doesn’t allow instruments to change keys without retuning their entire instrument. This is one of the many reasons it is hard to play bagpipes with other instruments. The reason bagpipes use this temperament is because it allows each of the bagpipe notes to be in-tune with the drones. If pipers used equal temperament tuning then the chanters would never be in tune with the drones.