I do not discuss cane drone reeds on this website. Why you may ask? I would not recommend playing cane drone reeds to anyone who isn't playing at a professional level of piping and if you are a professional piper then you won't be using this site. They are 10 times the amount of work as synthetic drone reeds and only sound slightly better and are not dependable. You would have to spend a large amount of time trying to get them to work and this time will be better used to perfect other variables in your pipe playing.

Drone Reed is Too Hard to Blow.

If your drone reed is too hard, (ie. taking too much air.) Then 9 times out of 10 you need to make the tongue shorter. To fix this just move the bridle up so that the tongue becomes smaller. You need to do this in small adjustments, 1mm at a time. Refer to Drone Reed Adjustments for more info.

If your drones are shutting off and won't continue to play, it means that they can't handle the pressure that you are putting into the bag.

Take the drone out of the stock and mouth blow reed as hard as you can. (Make sure not to slobber all over reed.) If it shuts off then move the bridle up towards the reed seat to open the vibrating surface.  Move the bridle about 1mm at a time and then try again. Keep doing this until your drone reed doesn't shut off.

If when you strike in the drones make a funny squeaking and squealing sound then move your bridle up towards the reed seat and also make sure the bridle sits evenly around the body of the reed.
Chanter sounds before or at the same time as the drones.

You want your drones to sound prior to the chanter coming in. If they don't, either they are set too hard or your chanter reed may be too weak. Assuming that your chanter reed is what you want, for each drone reed you will want to shorten the vibrating surface of the tongue by moving the bridle away from the seat. Again, use small incremental changes in the bridle position and test after each change.

Reed Too Loud and Too Hard to Blow

If you are finding that your drones are overwhelming your chanter reed (and you don't want to change your chanter reed), then you'll want to reduce the volume of your drone reeds. The longer the tongue that is vibrating the louder the reed will be, so to reduce the volume, you'll want to move the bridle away from the reed seat to shorten the tongue. In order to balance this pitch-sharpening change, you will flatten the reed by lengthening the sound chamber of the reed.
ie. moving the screw of the drone reed outwards.

Reed Too Quiet and Too Easy to Blow

If your chanter is overwhelming your drones or you otherwise want louder drones, moving the bridle out towards the reed seat and then move the screw inwards.

If you are using a moisture control system in your bag and you are having problems cutting out your drones at the end of a tune, consider investing in some drone valves. The valves will close off the source of air once pressure drops below a set level and help to shut down the drones. Drone valves do help making cutoffs more consistent, however, that being said I have never used them and with some time and effort you can learn to have clean cut-offs without them. 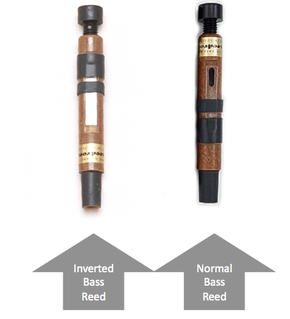 An Inverted drone reed just means that the tongue opens at the opposite end.

It's been found that an inverted bass drone will give you a better strike-in. However, this orientation adversely affects the tonal quality of the bass drone somewhat, in that, the reed will typically be a little quieter and possibly higher pitched as well.

I play an inverted bass reed and I do recommend them if you can get one. However, many players don't like them it's a matter of preference. 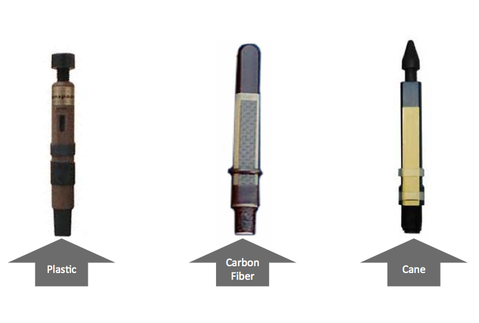 All 3 have benefits and draw-back. The plastic ones are the easiest to set up and make sound good. The carbon fibre ones are a little harder to set up, but they sound a little better. The cane will sound the best if properly set up, however they are the hardest to set up and are temperamental.
Double Tone.

When you blow a drone reed while its in the drone it will make two different sounds. The first will be a high pitched sound and the second will be a lower pitched sound. Here is an audio example of a tenor and bass drone double toning when you mouth blow into them respectively:
This happens because a drone reed produces a sound based on the rate of air pressure that flows through the reed. It's initially lighter which produces the higher pitched sound and when the air pressure get stronger it produces the lower pitched sound. Having a double tone is a very good thing. It indicates that the entire tongue is vibrating. 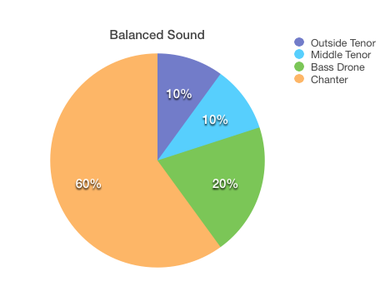 
Try to achieve this volume percentage. Like many bagpipe things this will get easier with practice and experience.

When you get a new set of drone reeds the synthetic tongue will be stiff and will not fluctuate as it should. Thus, it's very important to take some time and blow your drone reeds in before you make any adjustments to reed. I recommend putting a stopper in your chanter stock and just blow the drones for about 15 minutes 4 separate times before you make any initial adjustments to the reed. This will give your drones an hour to break in and settle. It will also give you an hour of hearing just your drones so you can get a feel for how they sound.

Cold or Wet: When it’s cold and wet the moisture that is blown into the bagpipes will not evaporate naturally and reeds will become wet causing them to become flat and may eventually just stop working altogether. It is best to avoid playing in cold and wet weather if you can.

Hot or Dry:  When it’s hot and dry drone reeds function the best. They will stay in tune with your chanter and work for long periods of time. Pipers use water traps and canister systems in their bags to help keep their reeds dry for this reason.