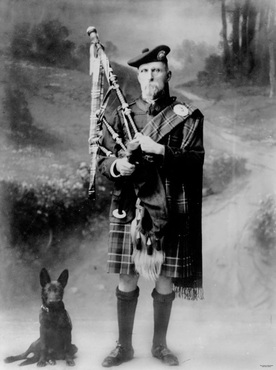 Congratulations on taking the first steps to becoming part of an exclusive club. From now on you won't be known as 'Sally' or 'John' you will be known as the guy or gal who plays the bagpipes. This isn't just an instrument, it's a lifestyle. It will effect every part of your life both musically and socially. I began playing when I was 12 years old and not a day goes by that I regret picking up the instrument. It has shaped my life. It paid my way through College, has given me a profession that I love, has allowed me to see the world, lead me to my wife and most of my best friends are pipers. These statements hold true with most pipers I know. It is a total life changing experience and for the better. However, nothing easy is worth doing and nothing could be closer to the truth when bagpipes are concerned. I will leave you with a quote from the famous piping instructor Neil Munro who says it better than I ever could.

"To the make of a piper go seven years … At the end of his seven years one born to it will stand at the start of knowledge, and leaning a fond ear to the drone he may have parley with old folks of old affairs. Playing the tune of the ‘Fairy Harp’, he can hear his forefolk, plaided in skins, towsy-headed and terrible, grunting at the oars and snoring in the caves, he has his own whittle and club in ‘The Desperate Battle’(my own tune, my darling), where the white-haired sea-rovers are on the shore, and a stain’s on the edge of the tide; or, trying his art on Laments, he can stand by the cairn of kings, ken the colour of Fingal’s hair, and see the moon-glint on the hook of the Druids.
- NEIL MUNRO -

Many enthusiastic beginning pipers will go straight out and buy a full set of pipes because they are so excited to begin playing. DO NOT be one of these people. Go through these lessons for a couple of months with your practice chanter and make sure you really want to play the bagpipes before making a $1,000+ investment. It takes most people from 9-12 months before I would recommend they buy a set of pipes. Would you buy a car if you didn't know how to driven? of course not. Same thing goes with the pipes. Learn how to play before you buy a set. 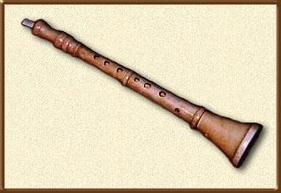 Early Bagpipe
The first recorded knowledge of the bagpipes was a sculpture found on a Hittite slab at Euyuk in the Middle East, dated to 1000 BC. By the 1st century AD, bagpipes existed in many countries including India, Spain, France and Egypt. At this time the bagpipes didn’t look as we know them today. It was simply a "reeded pipe" similar to the practice chanter you use for these lessons and similar to the image on the left.

Bagpipes began to appear in European art and iconography in the mid-13th century. The Cantigas de Santa Maria, compiled in Castile around 1350 depict several types of bagpipes and is pictured below on left.
They were also mentioned in The Canterbury Tales as seen in the image below in the middle.

“A baggepype wel coude he blowe and sown, And ther-with-al he broghte us out of towne.”

Evidence of the bagpipe in Ireland occurs in 1581, when John Derrick's "The Image of Irelande" clearly depicts an illustration of a bagpiper. The Battle sequence from My Ladye Nevells Booke (1591) by William Byrd, also contains a piece entitled "The bagpipe & the drone". However, the first clear reference to the use of the Scottish Highland bagpipes is in 1547 in the Battle of Pinkie Cleugh when George Buchanan (1506–82) claimed that they had replaced the trumpet on the battlefield. 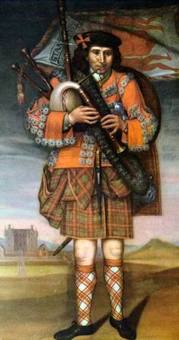 Bagpiper Seventeenth Century
The gaelic word for bagpipes is "piob-mhor" and is pronounced "peeb-more". Bagpipes have been around for hundreds of years but the great highland bagpipes were first established around 1650. The general look and characterists of the bagpipes today are very similar to what they were in 1650. However, they has evolved greatly since then. Believe it or not if you think it's hard to play the bagpipes now imagine doing it 400 years ago with an actual sheep's stomach, crooked drones, and reeds made out of bones and hand picked cane.

The great highland bagpipe doesn’t really begin its journey until the story of the MacCrimmon family, the house pipers for the Macleod’s on the isle of Syke. In 1595 Rory Mor MacLeod of Skye was fighting a war over in Ireland and returned home with a piper named Iain Odhar MacCrimmon. Iain was the son of Finlay of the Plaid and the piper who first inhabitated the lands in Skye granted to the MacCrimmons by the Macleods for their services as pipers.

Donald Mor was the first hereditatry piper to the Macleods in 1620. He was an excellent piper and was sent to Ireland by the macleods to study piobairechd in Ulster. While he was there his brother Patrick Caog was murdered by a MacKenzie from Kintail. When Donald got to Kintail to avenge his brother he burned down the entire village and was forced to flee to Sutherland for the protection of Donald Duaghal MacKay. This is where the tune title of “A Flame of Wrath for Squinting Patrick” comes from. Donald eventually was pardoned and came back to skye many years later. While home he lived a life of peace and we don’t hear to much about Donald again.

Many of our classic piobaireachd are attributed to Patrick Mor. The most famous of which “Lament for the Children” composed after 7 of his 8 sons passed away from small pox. Patrick died in 1670 and the hereditary piper for the MacLeod’s became his son Patrick Og. Patrick was a great teacher and taught many of the MacCrimmon's to play the pipes. He established the College at Borreraig to teach piping.  He wasn’t the great composer that his father was but he still wrote a good number of tunes. 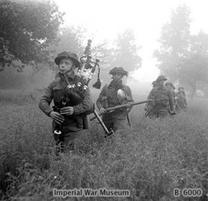 Bagpiper World War II
During the expansion of the British Empire, spearheaded by British military forces that included Highland regiments, the Scottish Great Highland Bagpipe became well-known worldwide. This surge in popularity was boosted by large numbers of pipers trained for military service in World War I and World War II.

In the United Kingdom and Commonwealth Nations such as Canada and New Zealand, the Great Highland Bagpipe is commonly used in the military and is often played in formal ceremonies. Foreign militaries patterned after the British Army have also taken the Highland bagpipe into use including Uganda, India, Pakistan, Sri Lanka, and Oman. Many police and fire services in Scotland, Canada, Australia, New Zealand, Hong Kong, and the United States have also adopted the tradition of fielding pipe bands.
Now bagpipes are generally only seen at weddings, funerals, parades, graduations and highland games where they have pipe band competitions. You will also occasionally seem them used in modern music such as Gaelic Storm, Drop Kick Murphy's and the Red Hot Chilli Pipers. They also appear in movie soundtracks such as Braveheart and Brave.
This is a very brief history of bagpipes and by no means am I a historian. So, if you want a better understanding of bagpipe history I suggest you look online. There is tons on information out there if you want it.