If your bagpipe is too hard to blow it's time to make some alterations to the reed. Signs that your reed is too hard to blow are below:Patience is essential when manipulating and blowing in a reed. Too much sanding too early in the process may have the desired result that day, but the reed will invariably ease up too much in the short term and will be of no further use. Be prepared to blow a little harder than you are ideally comfortable with for the first few weeks.


Options 3 and 4 are only recommended when reed will not function properly and as a last resort. They may make the reed easier to play and sound great in the short term. However, they will also make the life spam shorter and could create a double toning F. 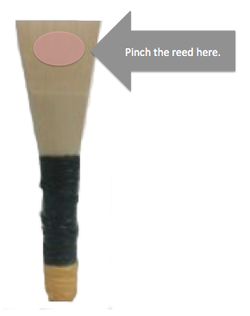 
When you get a new reed 9 times out of 10 you will desire a reed that is a little easier to blow. The simplest way to make your reed easier is to give it a nice hard squeeze/pinch in the location to the picture to the right. If that doesn't fix your problem then try some of the options below.

Removing some of the cane from a reed in the right area with either sand paper or a sharp blade can fix a reed that is too hard to blow or that has a double toning F. When removing cane from a reed always remove very small amounts at a time and test the reed in the bagpipe between adjustments, its very easy to take cane off but it can not be put back on.

When a reed is too hard to blow try one of the following options: 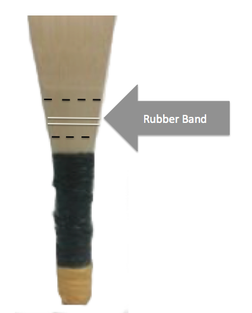 Place a small elastic dental band around the reed at the bottom of the cane. This is very effective and can often help stablize a reed in its initial blowing in period. Two or three wraps of the band around the sound box will ease a reed considerably; it will also lift the pitch. This band can remain on the reed for the duration of its life. It can be used effectively to raise and lower the pitch in small increments to assist with tuning within a pipe band environment as well. To raise the pitch simply slide the band a little further towards the lips of the reed. To lower the pitch slide it towards the staple. Be aware that if the band is placed too high it will muffle the reed too much, to avoid this keep within the sound box area.

*When putting on elastic band DO IT FROM THE BOTTOM, otherwise you will damage the reed. 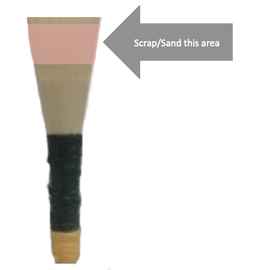 Use a sharp blade or small piece of light grit sandpaper to remove the some of the upper region of the blades remembering to remove the cane evenly across the width of both blades. This will also flatten off the top hand notes a little, so you may have to push the reed a little deeper in reed seat to compensate for this. Avoid shaving the lips of the reed and take off a little at a time. You can always take more off and you can never put more back on. many good reeds are ruined from pipers sanding and scraping their reeds to much. Do it a little bit then play it for 30 minutes. If its still to hard the next time you play take a little off again. 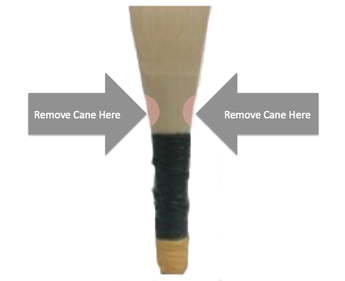 Try removing small amounts of the shoulders just above the staple. This should be removed evenly on both sides of each blade. Be aware that this will slightly sharpen some of the bottom hand notes, particularly C and D. This is a last resort thing to do, I rarely do this because it is likely you will ruin a reed. However, if you have tried everything else sometimes this will fix a stubborn old reed.