2)   Little Music – Also know as “Ceol Beag” (pronounced Kay-ul-Beg). Much like light music except simpler marches, straphspeys and reels. These are usually played by lower level bands and players at bagpipe competitions. Also, its what you typically would here in a parade or massed bands setting.

4)   Piobaireachd – Also know as “ceol Mor” (pronounced Kay-ul-Mor). This is the classical music of the bagpipes.  Although it sounds very slow and basic to play to the naked eye, its incediable hard to play well and is finger gymnastics at its best.

* But that's all history.
Today, pipers usually only refer to pipe music as being in only two categories.
1) Ceol Mor - Piobaireached same as above
2) Ceol Beag - which is everything else. 99% of the music you will play will probably be what we now refer to as "Ceol Beag"

Tempo Guide
When playing a tune you should always try and play it within the guidelines below. These guidelines allow for the tune to be played with character and should give enough time to play all the embellishments. 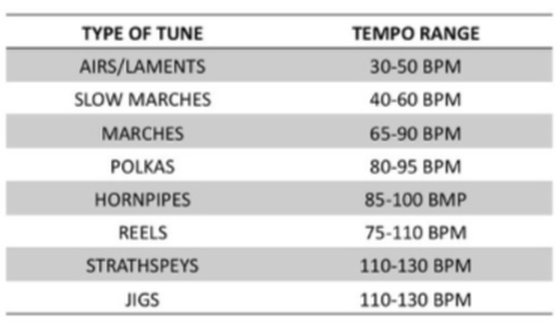